<- Return to the main blog

The Importance of Spaying or Neutering Your Pet: The Story of Saving Allie and Her Puppies

Unplanned pregnancy, being homeless or waiting for adoption are not situations unique to humans. These are realities experienced by dogs and cats too. Spaying or neutering is a simple, low-cost procedure that can reduce animal abandonment rates, prevent the deaths of millions of dogs and cats, and improve the health and life expectancy of your pet.

For some dogs and cats, being spayed or neutered can be the difference between life and death. This is the story of one unique survivor.

Allie is a petite black Labrador mix, probably under 2 years old. Her story, as we know it, began at a high-kill shelter in North Carolina where this pregnant dog and her unborn puppies were expected to be euthanized—that’s what happens in crowded shelters across America every day.

Thanks to the tremendous and generous efforts of Lulu’s Rescue in Point Pleasant, PA, Allie’s life and the lives of 6 precious puppies were spared. Allie was flown to Pennsylvania by Tim, a volunteer pilot with Pilots-N-Paws, a non-profit pet rescue service based in South Carolina. 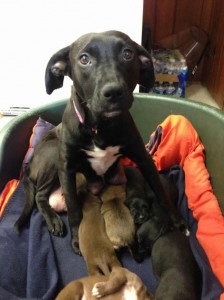 Doylestown Veterinary Hospital (DVH) and Holiday House Pet Resort agreed to foster and care for the pregnant dog and her eagerly-awaited puppies until they were ready for adoption through Lulu’s Rescue. Nina Cohen, a nurse and practice manager at DVH took Allie home over the weekend and that Saturday night—four days after arriving in Doylestown—she gave birth to six healthy puppies.

Nina and her family had lost their dog Lucy to cancer the year before so Ricky, a Hurricane Katrina rescue, was their only dog. Sweet and trusting Allie was comfortable in Nina’s home; she reminded them of Lucy. The experience of helping Allie with her natural birth formed a lifelong bond among Nina, Allie and the puppies.

Nina adopted Allie and one of Allie’s male pups, which she lovingly named Oleander at birth. The remaining 2 female and 3 male puppies were placed with forever families through Lulu’s Rescue.

Allie and her puppies are lucky, but that’s not always the situation with abandoned animals. Based on Allie’s comfort with people, pets and being in a home, it’s possible that her owners dropped her at a shelter when faced with caring for multiple dogs. Fortunately for Allie, her sweet disposition and good behavior probably helped in being rescued.

The hard reality is that approximately 6-8 million animals enter shelters each year:

Those numbers don’t account for the estimated population of up to 70 million stray/feral cats roaming communities across the country.

Allie did a great job giving birth, nursing and caring for her puppies but the process can be physically demanding on the body. Now it’s time to focus on her health and wellness so she can have a long and happy life. She’s scheduled to be spayed at the end of June. Not only will the procedure guarantee she won’t deliver another litter but it will provide medical benefits for the rest of her life.

What are the medical benefits of spaying a female dog or cat?

The greatest medical benefits to a female dog’s health are gained if she never goes through a heat cycle —when the estrogen levels rise and the female is the most fertile and ready for mating. However, the benefits still outweigh the risks even if the dog has experienced multiple heat cycles or delivered a litter. The chances of developing malignant mammary gland tumors are significantly reduced if your dog is spayed before her first heat cycle. Spaying also eliminates uterine cancer, growths or life-threatening infections that can develop in an intact female dog.. Eliminating heat cycles  also avoids the mess and unwanted behaviors which come with the twice yearly cycles.

For male dogs and cats, neutering:

Spaying and neutering benefits the pet, the community and you.

Clearly, spaying and neutering your pet provides benefits to the animal, the community and to you financially. The cost of the procedure is less expensive than caring for a dog or cat suffering from an infection or cancer. There’s a greater chance of abandonment or dropping the pet at a shelter when owners are overwhelmed by the time and cost associated with caring for a pregnant pet and newborn puppies and kittens. The financial burden is then placed on the rescues and shelters which may not be funded to care for so many animals, therefore resulting in mass euthanasia.

Spaying and neutering reduce the overpopulation of pets in shelters and rescues, eliminate certain infections, diseases and unwanted behaviors, and are a low-cost part of your pet’s overall healthcare. Call Doylestown Veterinary Hospital or your veterinarian today if you have questions about when to spay or neuter your pet. 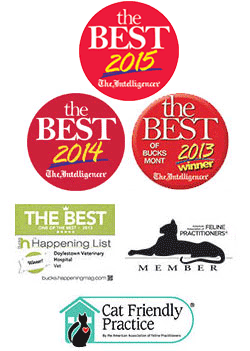 Our Commitment to You

In order to decrease the spread of COVID-19, and in compliance with recommendations from the American Veterinary Medical Association, we are rescheduling all wellness and routine care visits for our patients.